Monsignore o.s. is an educational organization in the Czech Republic recognized at all levels. It is a dance education centre that has existed for over 20 years and it has contributed to the intellectual and physical training of hundreds of young people. 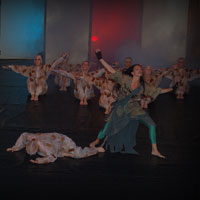 A number of its graduates became professional dancers and actors in Czech theatres and also abroad.

An idea to establish a dance centre focused on a systematic dance education of children came around in 1992. But already in 1988, when the “Monsignore group” started to develop, the first dance performances were created with only eight members. They were only short performances intended for various cultural events. DCM has become a civil society organization in 1990.

The aim of DCM is to support the education in the field of arts, dance movement and aesthetic feeling for children. Since 1988, as more and more children wanted to join our dance group Monsignore, the preparatory course for young children was created and thus the Dance Centre Monsignore was found. On top of regular classes DCM has offered several workshops lead by foreign guest-teachers (professional dancers), regular weekend workshops and annual Summer School of Dance. Students/members of DCM were gradually gaining systematic knowledge and practice in new dance techniques and genres. 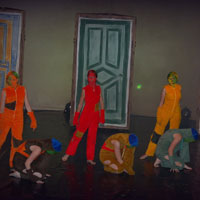 DCM has performed not only in regular dance shows in East Bohemian Theatre in Pardubice, but also in other Czech theatres (eg. Usti nad Labem, Chrudim, Ceska Trebova, etd.). Great acclaim and positive response prove that a dance performance can capture the attention of viewers of all age groups.

DCM also represented the city of Pardubice in France (city of Bergerac) with the dance project Enigma in cooperation with the Theatre of Pilsner.

DCM took part in the big audiovisual project “Honour of St. Vojtech” created at the occasion of the visit of Pope in Hradec Kralove.

DCM takes part in annual Dance Festival organized by the Mayor of Pardubice every October in East Bohemian Theatre and also in the festival “Mirror of Art”.